Please welcome Lina to the family! 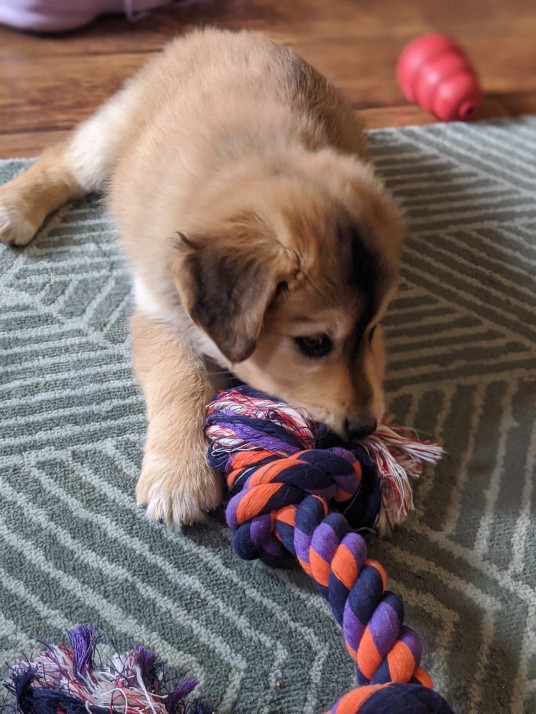 We got a puppy! Its kinda the whole reason I got a house. I was very insistent that we have a decent yard for puppies and possible future kids. I’d planned on trying to make the puppy happen sooner, but then Scarlet’s neuro issues happened and I couldn’t justify the cost. So I put my puppy wishes on hold.

But about two weeks ago, a friend texted me asking if I needed a free golden/husky mix puppy. Need? No. Want? Hell yeah! Her coworker’s neighbor breeds goldens. She’d gotten a golden from him and its a good dog. He rescued a husky and day one she got loose and happened to be in heat. So he ended up with a litter he wasn’t expecting. So I managed to talk my husband into it, contacted the breeder and set up a date to pick up the puppy.

We brought her home on Saturday. It was a fair drive from the breeder to our house. She didn’t like the car very much. She rode on our laps the whole drive but was concerned about the noise and corners. Luckily, she fell asleep for a good chunk of it.

Bringing a freshly weaned puppy home is hard. She had a bunch of siblings and half siblings to play with, not to mention a bunch of farm animals as well. So she’s feeling very lonely. Shes pretty cuddlesome so we are keeping her occupied as well as well as we can.

I’d love for her to spend more time out in our backyard. She seems to prefer it, likely because she was raised outside. But it just so happens to be raining. So we go out for pee breaks and spend some time running around out there to exhaust her. But I don’t want to have to dry off a puppy every time she wants to come inside. And she wont spend time out there without me or my husband sitting with her for now. Its only supposed to rain until Monday so she might get more time out there soon. 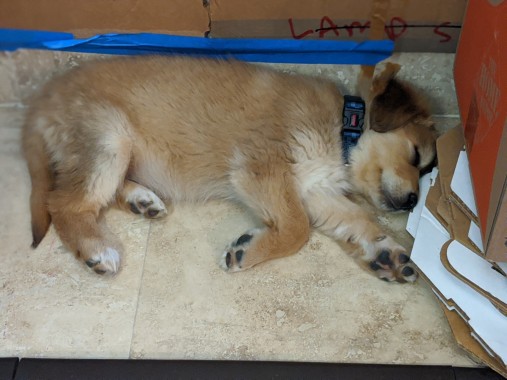 Scarlet is doing okay. I’d like to get him another acupuncture visit. Trying to figure out where to get the extra money from. Its been about a month since his last one. He isn’t struggling at the moment, not exactly. He’s definitely lopsided in what he can use of his body though. I’m okay with that to an extent. It’s going to happen due to his nerves just regrowing as they like. But I’d like to get the vet out since we had such a tough time with the farrier. 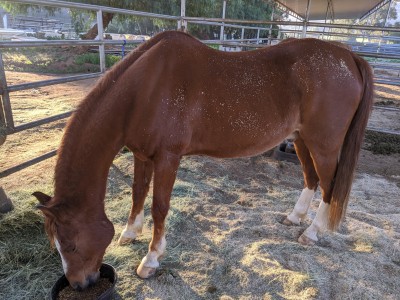 While I figure out where to come up with the money for that, we are just doing our stretches and walks as normal. We aren’t back up to the full walking distance that we had been. I’ve been busy with my half marathon training which means I have less time in the morning. And I want to make sure that he is fully okay before we take another step up in distance. He’s pretty content though. He gets treats, gets grain, gets groomed and has to do a small bit of exercise. I think he’s pretty comfortable as he is. It’s just a long road ahead.