My friend and her kids came to visit and ride again. I’m really enjoying teaching them how to manage themselves around Scarlet and how to ride. Scarlet appreciates all the treats he gets when they visit as well.

We started the day off by going to the tack store. J wanted to get some breeches as riding in jeans isn’t very fun. She also thought about getting some boots vs tennis shoes. I didn’t think much of it. She used to ride when she was younger so I agreed that she’d probably feel more comfortable in those when riding. I figured she’d get the low-end breeches and low-end boots since they don’t visit to ride very often.

She got ROMFH breeches.

And some nice short boots.

I should have guessed we would get more than we came for. Horse people are horse people even if they don’t ride much anymore.

Her kids both got small curry combs that fit their hands better than mine. I’m pretty pleased with that because they both were much more excited to groom with “their” brushes. XD

We also tried to see if there happened to be a saddle there that the kids would fit a bit better than my saddle. An 18 seat and two tiny children don’t really fit well. My stirrups didn’t even get short enough for their legs. There were a couple of smaller English saddles that we had them sit in but they were… expensive. Way too expensive. We’d need to find something secondhand for them as they aren’t riding often. There were no small western saddles. When we asked the kids, they both said they’d rather ride in an English saddle anyway.

J was awesome and got Scarlet a new fly mask and a new saddle pad. It’s a lovely teal color with a yellow/tan edging. It looks quite nice on him.

When we got out, the kids helped me groom like last time and I hopped on. It’s an interesting balance to work Scarlet enough that I’m not worried about him getting too excited while being ridden and not riding so long that the kids go nuts with boredom. We also had to switch saddles as K from the barn lent us the one she used for her son when he rode. It fit the kids much better and we had shorter stirrups.

J got on to ride a bit but ended up not doing too much as she’d increased her leg work out during the week and had no leg muscle left for riding. Then the kids got on. I had C walk Scarlet in circles about me as I tried to instruct her on steering. It was… quite a funny experience. Scarlet would turn with her but he would just do a 360 and head back to me instead of out to walk a circle properly. We eventually got some okay circles both directions and did about half a lap of trotting with me running beside the horse. C managed to keep her balance quite well and I was pretty proud of both of them. 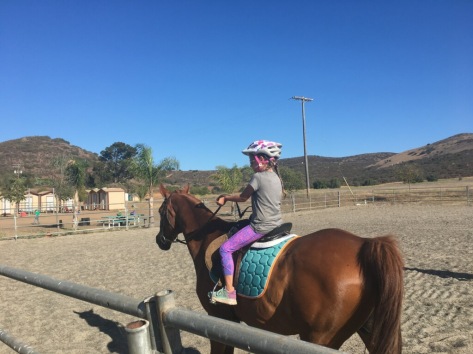 L got on after C but he was getting cranky and didn’t want to walk around on his own. That’s unusual as he is the one way more into animals but we rolled with it. I put a lead rope on Scarlet and we walked 4 or 5 laps together before he said he was done.

I’m hoping I can either borrow K’s saddle again or find a smaller saddle for the two of them for cheap. I definitely think that they will benefit from having the shorter stirrups as we continue riding. I did overhear C saying she wanted to do this more and her mom offered to get her lessons near where they live so fingers crossed that the bug has bitten another person!